When asked about her next money move, Aliya Janell insists that a phone call from Beyoncé is near, and it sure does seem fitting. You may have spotted this 4-inch stiletto wearing dancer on the social media accounts of some of the industry’s greatest such as Chris Brown, Trey Songz, Omarion, Nicki Minaj, Tank, Rotimi, Jason Derulo, and more. It comes as no surprise that she has acquired a verified Instagram account that has over one million followers, in a little over a year.

Aliya began taking hip-hop classes at five-years-old. She trained at one of Los Angeles’s hottest dance studios, Millenium Dance Complex. It wasn’t until after high school that she realized dancing was her ultimate passion. She booked her first tour with Love and Hip Hop Star, K.Michelle, where she lived out her dream of being able to dance on stage every night. 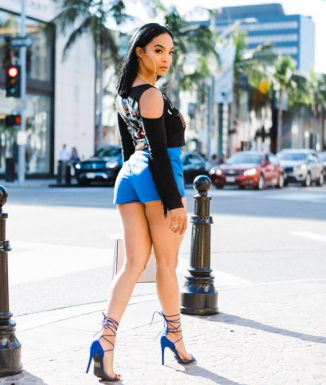 In January 2017, Aliya took a leap of faith and decided she had something to say that wasn’t being said in the dance community. She started her own weekly class, “Queens N Lettos,” where she focuses on the growth of a dancer whether they are a beginner, intermediate, professional, or etc. After three months of teaching her class, Aliya took to Instagram a video of her dancing to Chris Brown’s “Privacy.” Brown reposted the video to his account and within twenty-four hours of being reposted, the Los Angeles native dancer was at 5.3 million views. The Internet began to hashtag Aliya’s video as the “#PrivacyChallengeWinner.”

Aliya begins her class with an inviting warm-up circle. Her students demonstrate a dance move that everyone then follows. The purpose of the circle isn’t to prove that you’re the best dancer but rather have a good time. She proceeds with her “win circle,” which was suggested to her by her boyfriend. Aliya will ask the girls to share a “win,” something that they are personally proud of. This helps to create a sense of women’s empowerment.

The success of “Queens N Lettos” has allowed the young dancer to take her class outside of L.A. She has taught in Atlanta, New York, Greece, and more. Aliya doesn’t plan on slowing down anytime soon. I had the chance to speak to her about choreographing for Nicki Minaj, the pressures of the dance industry and her future plans.

“I didn’t want to be a choreographer, at first, I just wanted to strictly dance. After inspiring a person or two, it kind of made me realize that I have a voice and that people want to listen.” – Aliya Janell

Dayna: Who were some of the dancers that inspired you growing up?

How did your ethnicity play a role in helping you to stand out?

Being black and Filipino makes me look different. It makes me look ethnic. When people look at me, they can’t figure out what I am. They can’t put me into a certain category, so it’s just interesting. Being mixed helped me be different and special.

How would you describe your dance style?

It’s the perfect combination of sexy, street, and ghetto.

What are some of your thoughts when you are getting reposted by these artists such as Trey Songz, Nicki Minaj, Tank, and Chris Brown? Does that inspire you to work harder?

Yes and no. Yes, because it’s an amazing thing and you want that recognition. No, because when I do these combinations, I don’t do it with the focus of getting reposted. The repost itself doesn’t make me work harder but more of what I felt and how fun it was while I was performing that certain combination. That is what helps me flourish. Trey Songz comments how much he enjoys Aliya’s dancing Are there any artists that you would love to dance for or maybe choreograph for them?

Can you describe the stages of emotions you felt from choreographing to Nicki Minaj’s “Itty Bitty Piggy” in your Queens N Lettos class, to getting hired by her and now choreographing for her “Chun Li” video?

I almost felt like it was supposed to happen. Yes, it was surprising and a really great feeling, but something in me wasn’t surprised. My subconscious was ready for something like this. It’s definitely the grace of God. When that phone call from Beyoncé comes, I’m ready.

How did you come up with the idea for your win circle?

Actually, that was my man’s idea. I think he got that from an acting class. I’m a very spiritual person and I like when people come to my class and they’re comfortable. I never want them to stress out or be scared. I have the spotlight all the time because of who I am because I’m the teacher. So it’s nice to put the spotlight on somebody else. I care about the people who come to my class.

I know you stated previously you created Queens N Lettos because you felt like you had something to say. Was it a lack of inspiration in the dance community that made you feel as if you wanted to inspire others with your own taste?

Part of it, yeah. Honestly, sometimes the dance industry is so tainted with people’s energies and what people think is right and wrong. The dance industry is a big competition. I wanted people to take my class and remember what dance felt like without all of the pressure. “What I want my queens to take away from me and my class is self-love. To remember what it feels like to do something that makes you happy regardless of what your circumstance is, or what other people think that you should do, how old you are, whatever it is. I’ve learned self-love for myself, to expect the unexpected. Doing what you love to do brings so many rewards and blessings.”

Describe how important it was for you to find freedom in this industry where people often lose sight of the bigger picture.

People are racing to get to the artist. It’s important to remember why it is [that] you dance, and make sure it gives you the feeling of when you were a kid. Doing it because it makes you feel good and no other reason.

What is your life motto?

Damn, that’s a good one. I’ve never even thought about this. Trust your universe.

You’ve choreographed a lot of routines so this might be a little difficult. What are your top five routines that hold a special place in your heart?

Wow [she laughs]. Okay, so probably number one would be “Itty Bitty Piggy” by Nicki [Minaj], number two would be “Booty Remix,” third would probably be “When We,” the fourth would be “Top Off” by Beyoncé, and the fifth would be “King’s Dead.”

If I asked you five years ago, what would your life be like today, would that answer mirror the life you’re living now?

I'm the wolf. Where is Little Red Riding Hood? pic.twitter.com/V4A7DGGHvw

What’s next for you?

Being a movie star, continuing to be the owner of a successful business, hopefully opening up a dance studio soon, and starring in a movie. Getting into the acting world to broaden my horizons. Just doing what I do, making viral videos and working with Beyoncé.

The snippet of the video above is when Aliya Janell and I shared a moment in her Queens N Lettos class.