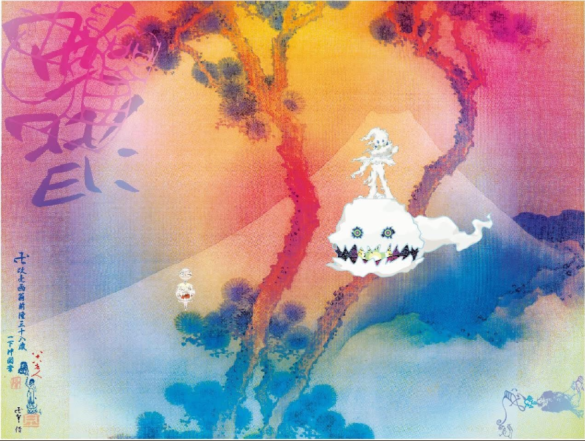 June 8th was solely recognized as Kanye West’s birthday, but now it’s going down in history as the day that Ye and Kid Cudi gave the world an iconic offering. The Chi-Town rapper announced a little over a month ago that he would be teaming up with ex- G.O.O.D Music signee for a joint project. Sticking to Kanye’s new ritual, the duo’s album stays true to the seven-song rule and clocks in for twenty-four minutes. The LP features vocals from PUSHA T, Yasiin Bey, and Ty Dolla $ign. After replaying the record countless times, one question remains: Was Kids See Ghost worth the messiness of it’s release? Let me explain.

If there’s one thing that’s undeniable when it comes to Kanye’s talents, it’s his ability to produce a good album. He’s proven that three times this year already with PUSHA T’s Daytona, His work with “ye,” and now this joint project with the Cleveland-native. The beats used for these tracks are nothing short of amazing. Cudi and Kanye have been preparing for a moment like this from past projects such as My Beautiful Dark Twisted Fantasy’s “All of the Lights,” 808’s & Heartbreak, The Life of Pablo’s “Father Stretch My Hands Pt.1,” and Man On The Moon.

Being able to identify the intro track might be one of the hardest tasks at hand. Kid Cudi and Mr.West clarified that the tracklist shown on many streaming platforms is in need of correction. “Feel The Love” correctly starts the album off. I say this everytime, but I’ll say it once more so the people in the back can hear me as well. If the intro track is underwhelming, there’s a high possibility the rest of the album will follow. Luckily, that’s not the case. In fact, having Pusha T spit a fire verse (and it kills me to say that because of his beef with Drake) creates a nostalgic G.O.OD Music reunion feeling. It sets the tone for the album in a way that listeners know is about to get real.

Cudi and Kanye bring out the best in each other and inspire each other to move accordingly in their individual lanes. The sample uses from Marcus Garvey and more proves that both artists want for this project to be memorable. After hearing Ye’s flow on these tracks, it’s evident he took more time to prepare for this collaboration, and that’s forgivable. Ye’s ability to turn a Christmas song into an infectious beat, great sample, and lyrics to follow on “4TH Dimension” is commendable. He proves he has a couple punchlines up his sleeve with, “It feels so good it should cost, bought an alligator, I ain’t talkin’ Lacoste.”

Whatever Kid Cudi did to create his contributions on 'Kids See Ghosts,' I want him to do that again for a full length solo album.

It’s one thing to hear Kanye talk about mental illness, but it’s another conversation when Cudi does it. His voice is honest and relatable. The “Day and Night” rapper is no stranger when discussing serious issues, so it feels like a therapeutic session between him and Ye. He encourages everyone on “Reborn” to stay strong and “keep moving forward.” He gets personal in his verse by stating, “I had my issues, ain’t, that much I could do, but, peace is something that starts with me. At times, wonder my purpose, easy then to feel worthless, but, peace is something that starts with me.” Overall, the album gets an 8.7 out of 10 stars. The messiness of the real versus fake tracklist felt unprofessional considering their stature, regardless if they corrected the mistake. Nonetheless, the album was well worth putting together the puzzle pieces of what goes first, in order to understand the duo’s mindset. Kanye and Cudi will be seen in a light where they both take a “W.” The church can say Amen and put this body of work on the classics list. Like Ye and Cudi sing on the outro song “Cudi Montage,” the lord is shining the light on them as they prove there’s strength in pain.

kids see ghosts. MAN. if you don’t think kanye is the best producer out there right now then i don’t know what to tell you

Dude how did Kanye just go 3/3 and make the 3 best albums of the year a week apart from each other. Daytona. Ye. Kids See Ghosts. And 2 more in the next 2 weeks

I think it’s pretty flippin’ impressive that Kanye West was able to produce DAYTONA, ye, and Kids See Ghosts so close to each other and still have each one maintain its own distinct sound.