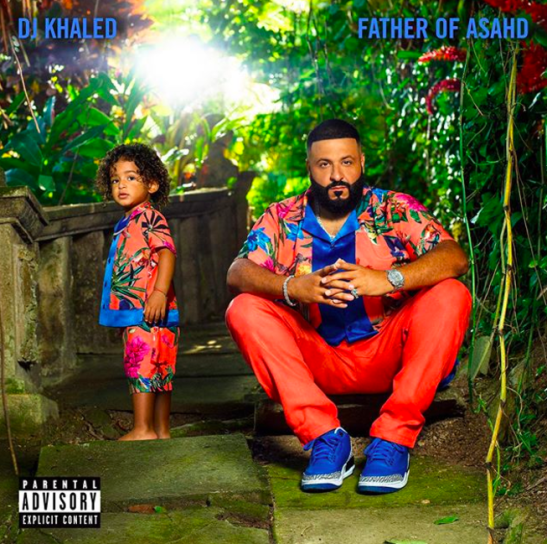 It’s Friday night. Your friends convince you to go to a party that will include some familiar and unfamiliar faces and good music here and there. The party is an experience based on what you make it. In other words, that’s DJ Khaled’s latest offering Father of Asahd, which released to all streaming platforms on May 17.

In comparison to his previous works in the past, Khaled kept everything top secret in terms of what fans could expect. Father of Asahd runs for 55 minutes and features a total of 15 tracks. Staying true to his usual lineup, Khaled secured vocals from Chris Brown, Big Sean, Future, Beyoncé, Travis Scott, Lil Wayne, Nas, Meek Mill and many more. The We the Best CEO also recruited some newer talent for his LP including SZA, Cardi B, Lil Baby and Gunna.

Going back to the party theme, the party starts off strong. Tracks one to seven are golden. Khaled’s talent is his ability to pair together artists that bring out the best in each other. This is proven on tracks like “Wish Wish,” featuring Cardi B and 21 Savage. 21 is able to vibe off of Cardi’s aggressive demeanor. Moving forward, what’s a DJ Khaled album without one Chris Brown appearance? Brown croons on the chorus of “Jealous,” and sets the tone for the rest of the engrossing Tay Keith-assisted beat.

Khaled has mastered the feeling of nostalgia. SZA walks effortlessly on “Just Us,” which features a sample beat from Outkast’s “Ms. Jackson.” Three months ago, hip-hop encountered a major loss with the untimely death of Nipsey Hussle. So, for true King Nip fans, hearing his vocals on “Higher,” felt bittersweet and full circle.

As the party continues, this is where the DJ starts to play throwaways, which I’ve categorized as tracks numbered eight to 11. Certain artists already had their chance to shine on the LP, so reusing them feels redundant. Another example of this tiresome feeling is reintroduced on the outro. It was not necessary to have another Buju Banton featured track.

Coming to a close, the perfect outro would’ve been Big Sean’s “Thank You.” On the STREETRUNNER and Tarik Azzouz- assisted produced track, Sean finds himself giving thanks to Khaled over an infectious beat. The Detroit rapper, who is often overlooked in the industry, makes a hilarious reference to his ex-girlfriend Ariana Grande’s “Thank U, Next.”

Overall, Khaled has a strong beginning, weak middle, and makes a comeback for the ending. Regardless of the reviews, the Grateful producer boasts that this is his “greatest body of work.” Khaled has enough tracks to stay relevant for summer 2019.  So, was the party worth attending? Ultimately it’s what you make of it. Father of Asahd is a moment where one might be happy to say they attended, but it won’t serve as a reference in the list of parties of a lifetime.

#FATHEROFASAHD available now.
My greatest body of work!
This one is for @asahdkhaled Mama Asahd and #FANLUV!
Thank you god🤲🏽 I love you.
God is the greatest!
Love,

Nipsey with a legendary verses..
John Legend with the runs..
The production..#FATHEROFASHAD pic.twitter.com/eoOTg8GOkT

Mannn that #FATHEROFASHAD is straight fire bro 🔥🔥🔥 Nipsey, first of all 🙏🏽🙌🏽 then that Cardi and 21.. my guy Wayne! and then that La India shit with Meek; J Balvin and Jerimih 🙅🏽‍♀️🤷🏽‍♀️🤷🏽‍♀️ and thennnn let’s not even get on the fucking reggae vibes WHAT THE FUCK lmao 😂

Aye, can someone text 21 Savage and ask him why he went so hard on Wish Wish?!

He pressed the gas pedal all the way down on this one 😫 @21savage #FATHEROFASHAD pic.twitter.com/DD1bFFa2Nf